T-20 format in the world of cricket brought extensive changes in the game bringing in the constituent of local teams with a provision for international players turning it into the globalization of cricket. As a result, the nations around the globe are becoming one in terms of providing sports entertainment; positively impacting the development sector of the host nation.

The Kashmiri Population has been thrillingly waiting for this exciting game to come home.  Cutting Edge Group management has long been dreaming for a cricket league that stepped forwarded and initiated the Kashmir Premier League (KPL) in 2021, sanctioned by Pakistan Cricket Board (PCB). In its inaugural season only, KPL has become a mega brand with its picture-perfect start with an absolute mix of content, stars, Kashmiri, Pakistani & International players, making it a global phenomenon. Revolutionarily breaking the historical records of digital viewership, KPL emerged as the one of the largest cricket leagues in the world sports arena. Also, the presence of the top most dignitaries from Kashmir and Pakistan added to the brand value and global image of KPL.

With the Upgradation of Muzaffarabad Stadium with state-of-the-art LED lights, international standard playfield, and exceptional quality Live Broadcast, the contest was bursting-off with sportsmanship and joy of independent and peaceful sports entertainment. KPL also triggered the escalation in the economic, social, and tourism activities in the region along with the domestic sports accomplishments. All these factors along with the franchise branding added to the reach of KPL giving it phenomenal success in the world cricket arena. Now, KPL is one of the most sought-after cricket leagues in the world.

Today, branding in sports is considered to be one of the most important assets of any organization. Corporate brand management plays a critical role in forming positive attitudes towards the organization. Initially, KPL was presented to the world with 6 franchises including Rawalakot Hawks, Muzaffarabad Tigers, Mirpur Royals, Kotli Lions, Bagh Stallions, and Overseas Warriors. KPL emerged as a distinct brand using the various elements of branding especially giving each franchise team a distinct identity, ownership, promoting it in a unique manner. This led the franchisees to think out of the box, market their brand’s soul identity, and shape continued association from large companies, partners, and sponsors. All 6 franchises received an overwhelming response from the market that helped them build their brand identity yielding profitable results for the franchise owners that were beyond expectations.

Yet, Team Management played an important role in squad selection, talent acquisition, performance management, and administrative support. The consistent performance of the teams kept the advertiser/sponsor associated with each franchise.  The management also played a vital role in building their brand potential. The winning team was the result of a winning combination of several factors including the strength of the management team.

Now, KPL is advancing towards its second season and various happenings are going around the corner. The most engaging development is the expansion of franchises in the coming season in 2022. KPL has added 2 more franchises namely Jammu Janbaz and Gilgit Markhor in its pool of existing 6 franchises, shaping it to 8 teams. The additional two franchises are already undergoing the initial process for auction for franchises ownership. Keeping in view the global accreditation of KPL in its first season, a large number of individuals and organizations have shown their interest in getting the ownership of the said franchises. KPL management is going through the scrutiny of those who are interested and will be finalizing the ownership with the best suiting aspirant.

The KPL franchise and their teams have become distinct brands each having its ownership, sports celebrities, brand spend, sponsors and partners, International players, social media websites, fan zone, blog spot, Team apparel, accessories, and other stuff associated with teams making it complete brand by itself. The critics believe that the coming seasons of KPL will be surprising for the onlookers as well as for the folks undermining the competencies and proficiencies of KPL.

Kashmir Premier League is a new way of experiencing cricket with a local, national and international flavor. KPL has a long way to go but has already emerged as one of the great cricketing brands in the world. The actual spirit of the game of Cricket is glorified as an experience in mega-brand KPL.

Advancing Towards it’s Second Season, KPL invites EOI for Franchise Team Rights – Now is the time to be a part of KPL. 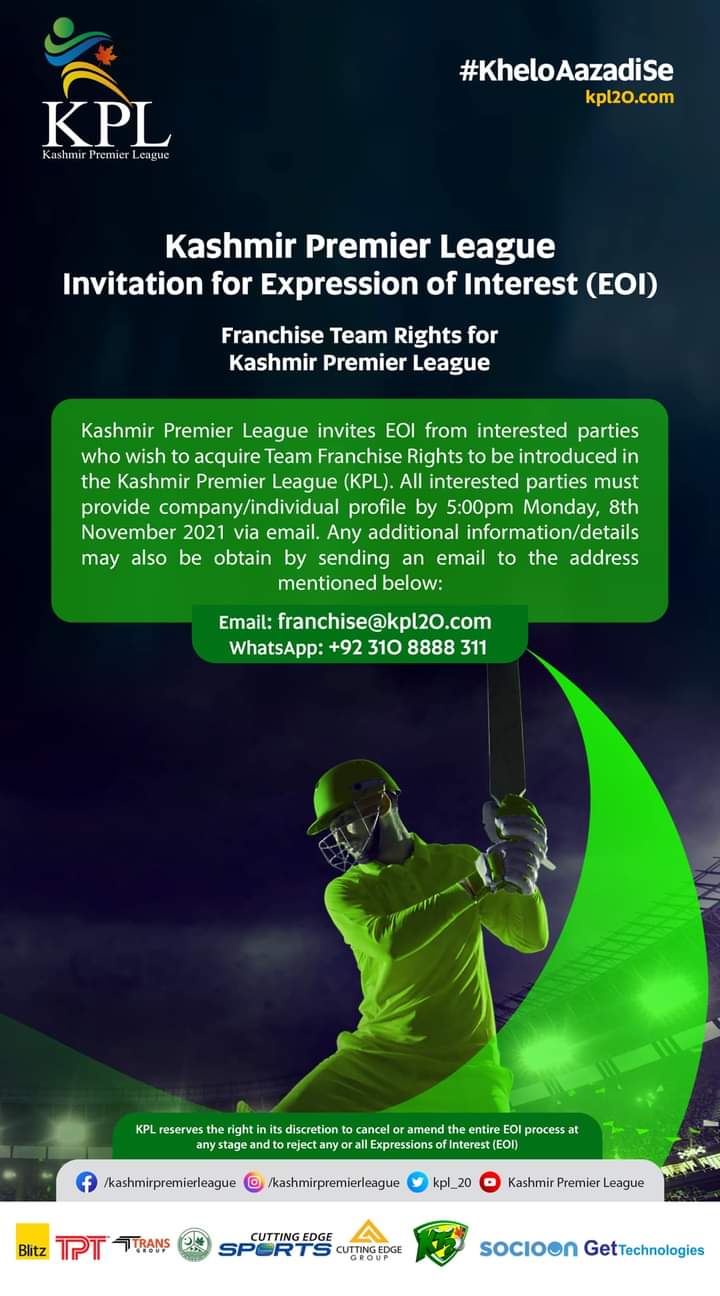